Last week, we ended up with a nice looking artist details page.

While I had played around with animations in Flutter before, there wasn’t a tutorial on how to orchestrate multiple animations together. Since that tutorial now exists, I thought this would be the perfect time to test it out.

Just having a quick glance at the animation APIs, I thought having something meaningful ready would take some time. Learning an entirely new animation API would probably require some getting used to, right?

I was wrong. I was able to whip up the prototype for this tutorial in one hour.

Without further ado, let’s get to animating.

The sample app is right here.

Since we’re going to have seven different source files, it makes sense to organize them well.

This is how the file and folder structure looks like: 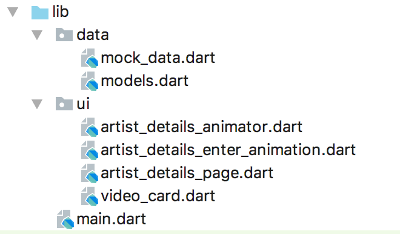 See here on how the data directory looks like.

Before getting our hands dirty, let’s go over some theory first. We won’t go over the very basics since Sergi and the official documentation both do a great job of explaining that.

Simply put, Tweens can turn a beginning value into an end value gradually and smoothly over time. The most straightforward example would be a Tween between two doubles.

Suppose we have this:

If the controller has a duration of 1 second and we print the value of the _animation every time it ticks, the output could be something like this:

As we can see, the tween is turning the value 0.0 to 1.0 smoothly with small increments. For example, a night turning into a day would also be a Tween; instead of it happening instantly, it happens gradually.

To orchestrate different animations together, we use something called an Interval curve. Interval curves allow us to control the start and end time of an animation.

The duration for this AnimationController is 1 second, which means it takes one second to complete the whole animation. The animation starts at 0.0 and ends at 1.0. In other words, the element in question is animated from invisible to fully visible.

Controlling the start and end time with Intervals

If we run the example above, we can see that the opacity animation only runs for 0.5 seconds. This is because our Interval starts at 0.250 and ends at 0.750.

While the opacity is still animated from invisible (0.0) to fully visible (1.0), the animation starts playing at 1/4th and stops 3/4ths in the timeframe of the parent animation.

When should I use Interval curves?

When having only one animation, using the Interval curve doesn’t make much sense. We could just set the duration of the parent animation to 500 milliseconds, get rid of the Interval , and we’d have the same result.

When we have multiple animations which may overlap or start after each other, intervals suddenly become useful. To quote the start of this section, intervals allow us to orchestrate different animations together.

Creating an AnimationController for the main animation

This will be the main animation that all other ones will be based on. It will hold a single AnimationController which will start playing when the widget becomes visible.

In IntelliJ IDEA / Android Studio, there’s a handy live template for a stateful widget with an AnimationController. All we need to do is to write stanim and most of this will be created for us.

We initialize the AnimationController in the initState method, which is called when our widget gets inserted into the widget tree.

We also pass the AnimationController as to the ArtistDetailsPage as a constructor parameter. The reason for this will be clear soon.

Refactoring the ArtistDetailsPage to be animatable

If you followed up to this point, you might have noticed that the IDE is now giving errors. This is because the ArtistDetailsPage doesn’t have a constructor parameter called controller. Another thing is that the parameters are positional, not named ones.

This is how the ArtistDetailsPage currently looks:

Here are the changes we need to make:

add a member variable called animation for a class called ArtistDetailsEnterAnimation. We’ll create the class in the next step.
refactor the Stack widget to a method called _buildAnimation and return an AnimatedBuilder for the Scaffold body instead.

Seems a lot, but it’s not. Here’s what we end up with:

The AnimatedBuilder widget here is responsible for rebuilding its builder parameter whenever the animation changes its value. So, our _buildAnimation method will rebuild the widgets every time the animation ticks

If we run our app now, we won’t see any animations. Let’s change that.

Creating the file for the animations

While we could have the animations defined in the ArtistDetailsPage widget, I prefer to have a separate class dedicated to them. This allows us to reduce vertical clutter in the UI code.

For every one of these animations, we’ll follow the same steps.

The divider is merely a Container widget that has a height of 1.0 and animated width.

The UI code for the text animations uses a little trick. By using the withOpacity method of the Color class, we can avoid wrapping every single Text widget in an Opacity widget.

The position and opacity for the video scroller

If you got this far, these animations here should be familiar to you. Just some regular old Tweens and Intervals.

We meet the Transform widget again. This time, we use the Matrix4.translationValues transformation, which moves the widgets pixels before painting it on screen. The three values stand for x, y, and z, but since we want to animate the horizontal position, we only use the x value.

If you got lost, here’s the entire file that has the animations defined.

If you missed it, the sample app is here.

While Flutter’s animation APIs might be different than in native Android or iOS, they’ll start making sense quite fast. Tweens are powerful: along with lots of other things, we can lerp between Colors, TextStyles and even Themes.

React Native vs Ionic: Which is The Best Framework?

How to do Asynchronous Programming in Flutter with Dart

flutterappdev is one of the leading Article and blog sites for anyone like as a developer who wants to learn something. We envision a world where people have meaningful experiences.

We use cookies to ensure that we give you the best experience on our website. If you continue to use this site we will assume that you are happy with it.Ok